Hit enter to search or ESC to close
Kilimanjaro

Day 7. Summit up, summit down

I slept only an hour or two before our summit. Sleepy and tired I woke up with a strong urge to poop. I had worries that I had diarrhoea because the previous days there were already some stomach problems. Right before we started I had to go to the toilet. Shit! I have definitely now diarrhoea. What a “lucky” coincidence for the summer night!

My mood went down because of this but I gonna push myself and make it to the top. We started to walk up at midgnight. It was chilly but not extremely cold and not windy in the beginning. The beautiful sky was full of sparkling stars sсattered around from one horizonth to another. The full moon was so bright that we could see the shadows of surrounding landscape: Mount Meru, Mount Mawenzi, and clouds behind us. Some people were walking even without headlamps.

As we got higher it got much colder so that my legs and feet started to freeze. Why did I not wear addiitonal underwear and socks? Stupid me! The wind became also stronger. My nose started to run and the skin under it got irritated when I wiped out the unendless stream of snivels. My abdomen was in pain because I had to hold the strong urge to poop. I just could not go onto the stones right now under such harsh weather conditions! My eyes got dry because of the freezing winds and I had to put on my ski glasses. Luckily, I did not have any headache at least. I was begging the time to pass by quickly and the sun to rise up earlier. I was suffering mentally and physically.

My water in the bottle got frozen but we had luckily also hot water. This however was not helping me much to warm up. We tried to make our stops shorter to avoid the cold. So freezing it was outside! We were just walking and walking up for all 7 hours along. The whole way to the Stellar Point seemed to be endless but after so much hardship we got finally there!

Tip: Take only hot water in a thermos! The rest of the water is likely to freeze.

As we reached the Stellar Point, the sky got already brighter and the whole horizonth behind us was turning into pinkish colours. The sky was anticipating the sunrise. Soon we will finally see the sun!

After a short break we continued to our goal destination: the famous Uhuru Peak. The path after the Stellar Point was much easier but we were almost out of energy. I was stumbling more often and even slightly shaking. Other team members were also weak and barely walked up.

Right after the Stellar Point I wanted to let my inner bodily gases out but instead my inner fluids got out. Shit! This is now getting worse. I knew that it is only one hour left until the Uhuru Peak, so I tried to ignore the fact that I had just pooped into my pants and I just continued walking.

What was helping me to go on was the landscape around. The horizonth was getting quickly brighter. Huge ice walls were hanging on my left side and the crater valley was sleeping on the right. Before the Uhuru Peak, weenjoyed the stunning sunrise. The first sun rays were already touching my face. I was happy that the harsh night is over and we’re almost there at the peak. I could see it and people on top of it taking pictures! We need to walk only 5 to 10 minutes more! 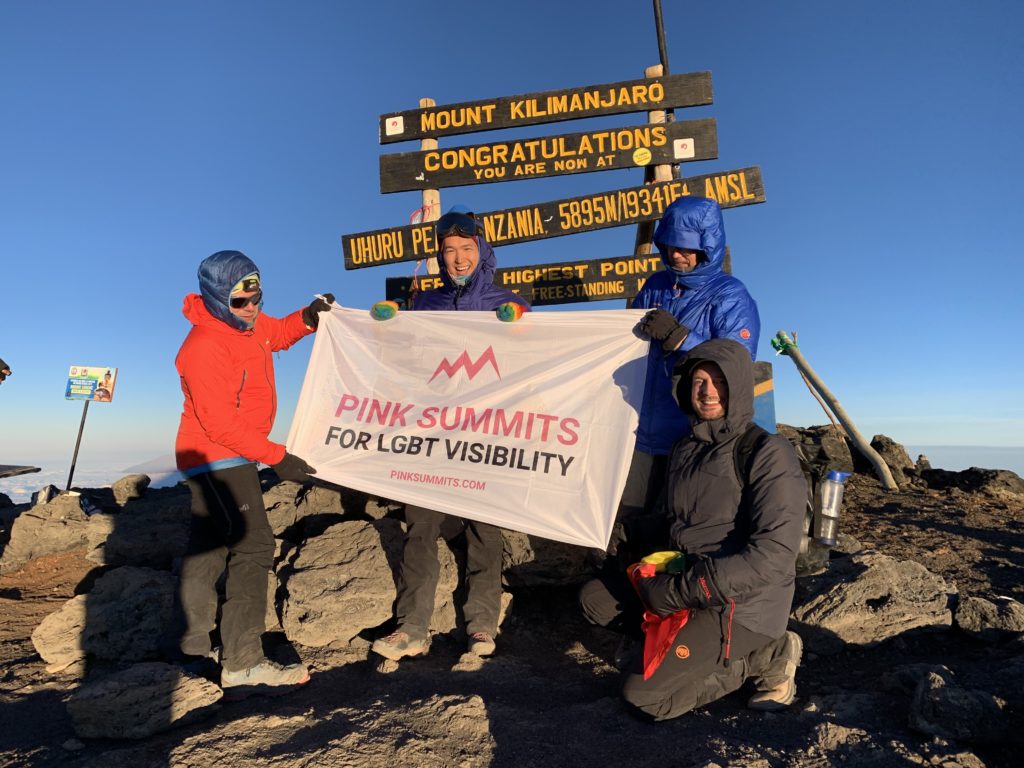 At around 7 a.m. we were at the famous sign congratulating us of being on the top of the highest mountain of Africa. I was proud of my team and what we achieved. I didn’t want to stay longer there though. I still had something brownish or maybe even greenish in my pants and had an unbearable painful urge to poop. I asked others to take pictures with kyrgyz and rainbow flags as well as our campaign flag. Some of us were probably worried about the reaction of others and especially of our guides but no one said anything. Lucky us! 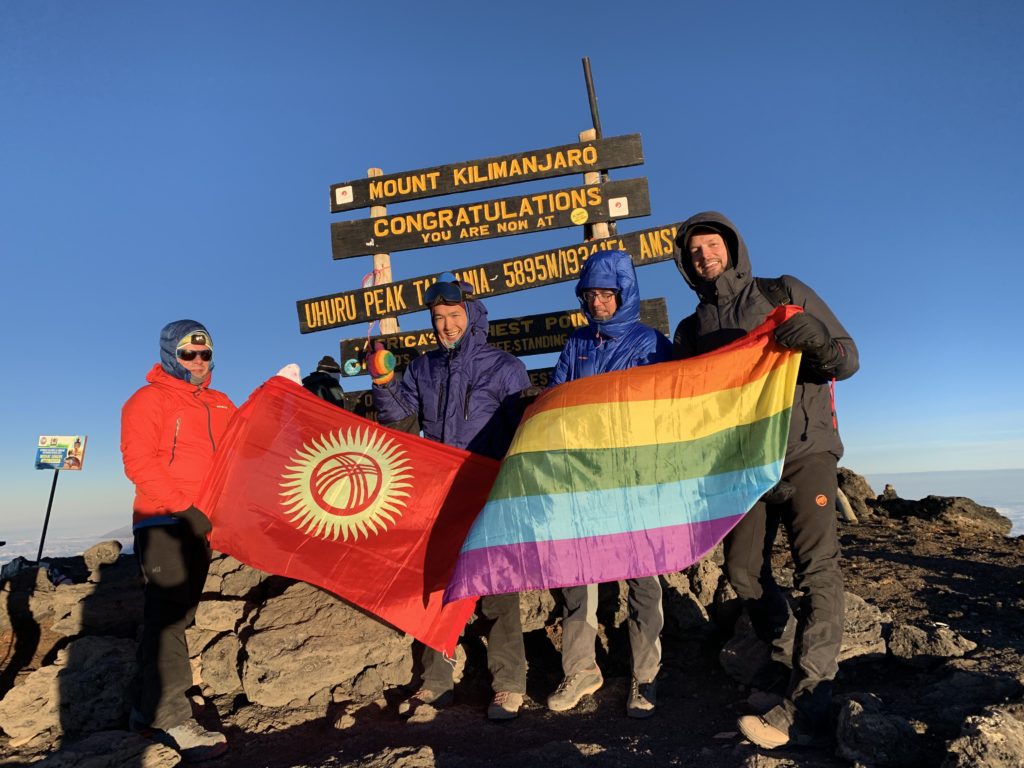 The team wanted to enjoy it longer at the summit but I took one of the guides and went down. Unfortunately I had a real urgency and needed to descend. After the Stellar Point it started to get warmer and I could find a place behind one big stone to make my big business. There was a problem though. I realised that my fancy biodegradable wet wipes turned into a chunk of ice. So I was squatting there behind the stone trying to warm up those wipes with my breath.

The way down was on a different path. It was very dusty and later it got also really hot. So hot that you could walk naked! Almost at the end I went on to the stones once again because I knew the public toilets in the camp are quite filthy. Going there into public toilets is torture in itself.

After I reached the camp I changed my stinky clothes and took a “shower” with wet wipes. Soon the rest of the team arrived. They were all exhausted. During our breakfast I asked the team to go right to the Mweka Gate instead of sleeping in the next camps. Because of the diarrhea it was hard for me to stay in the camps, constantly get up and get out of the tent in those cold nights. I would prefer to walk all the way down, to suffer a bit longer but to be rewarded with a hot shower, a normal bed and a clean toilet. And of course wi-fi 🙂

Martin liked the idea immediately. Others had concerns about the guides. They were definitely tired too! After we talked to to the guides, they shortly discussed it among themselves in Swahili first, then accepted our suggestion even if there were somewhat unhappy about it. The mentionied a word ‘tariff’. Maybe they were worried that they would not be paid for the last day but this should not be a case because we’ve paid for the whole trip in advance and we were not planning to get refund for the last day.

Without a proper rest we had to pack everything and started to walk down. It was exceptionally hot, but we were moving quite fast. Right before the first Mweka camp the path became steeper. We had to walk on the large stones that exhausted us quickly. The whole path to the lower Mweka camp was like a hell. My feet were all in pain. I got even a bloody nose because of the heat and exhaustion.

After several hours of walking in the mountain desert and later among the bushes under the scorching heat we finally reached the forest. The path after the lower Mweka camp got easier: it was a well prepared path and we walked in the shadows of trees. However, we were so exhausted after this long night, after the summit walk and now we are descending for several hours. We wanted only one thing in the world: to reach the gate!

I heard Martin was annoying the guide by asking the same question over and over again: “How long is it still left until the gate?” He was impatient because he was exhausted. We were all tired and out of energy. 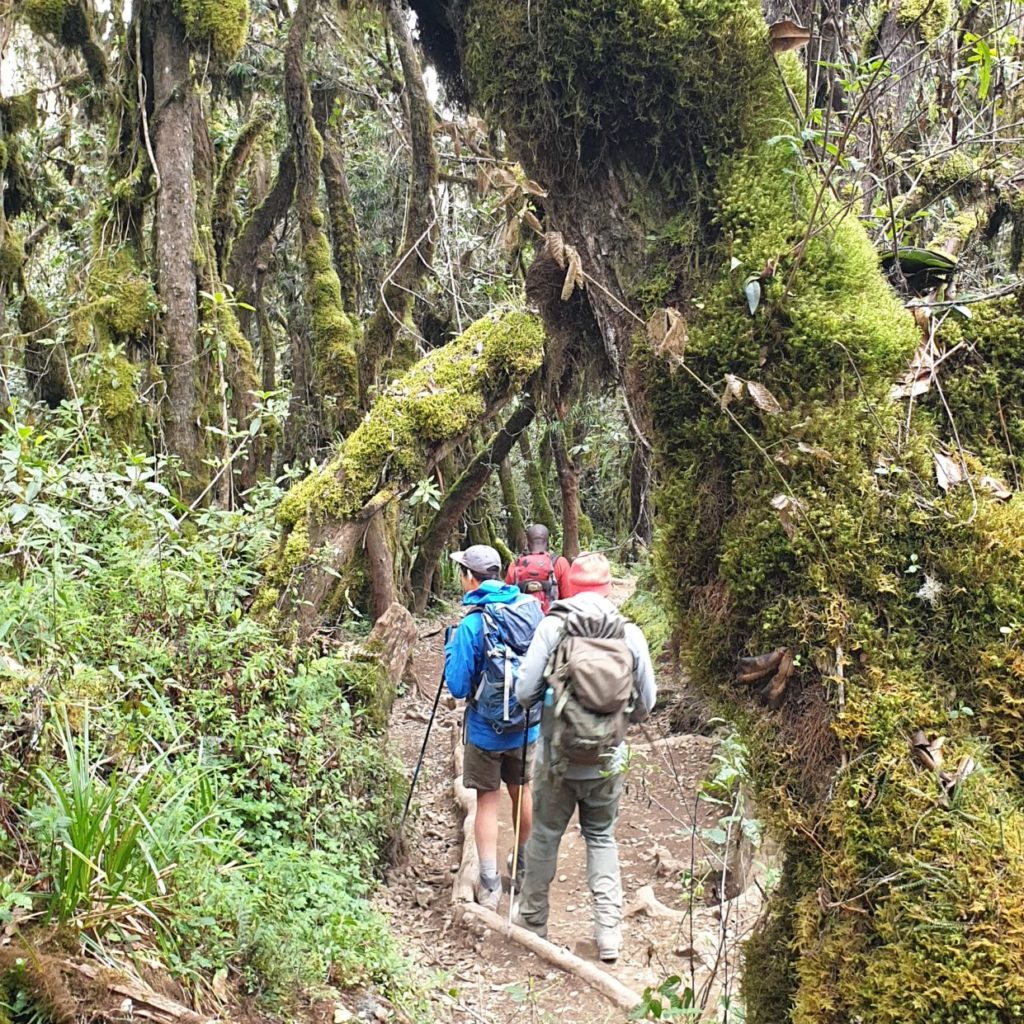 The forest was very beautiful though and I enjoyed the rest of the hike despite it being harsh with its muddy paths. After about 2 hours of walking in the forest, we reached finally the gate!

Our porters and our cook were already waiting for us. We had a small beautiful ceremony. We thanked them for their hard work, gave collected tips and hugged each one of them. They replied with group singing, cheering as up and showing their respect. At this moment I felt very thankful to each of them: they made our ascent possible!

Now we deregistered ourselves and got our certificates confirming our ascent to Kibo. Soon after we were already in the car on our way to the civilization and comfort…

If you want to keep us actively blogging and to support Pink Summits campaign as well as LGBT+ handcrafts from Kyrgyzstan, my home country, please, have a look at our shop here. Thank you for making our campaign possible!